Regulation D is an Important Exemption; Rule 506 Being Most Important of All

Because of financial imperatives for company formation, exemptions from Section 5, particularly Regulation D, are very important for capital formation in the United States.

A study was conducted in 2010 that showed Regulation D offerings leading all other kinds of offerings (Regulation 144A debt offerings) for largest total amount of capital raised in 2010.

Let's place Regulation D capital raising into better perspective as compared with the amount of capital raised by IPOs. 2014 IPOs, according to PwC's Deals Practice, raised the highest proceeds for IPOs since 2000. And yet, the total capital raised from all IPOs in 2014 in the United States was only about $84 billion, which was much less than 10% of of the capital raised in Regulation D offerings in 2010, 2011 or 2012. 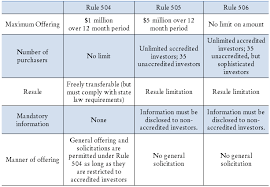 Thank you for contacting us. We will get back to you shortly.

Please complete all required fields below.

Clients Recommend Us On

Avvo - Rate Me
Google - Rate Me
Lawyers.com/Martindale- Rate Me

The Nick Yocca Law Firm is committed to answering your questions about business law and corporate compliance matters in Orange County.

We'll gladly discuss your case with you at your convenience. Contact us today to schedule an appointment.